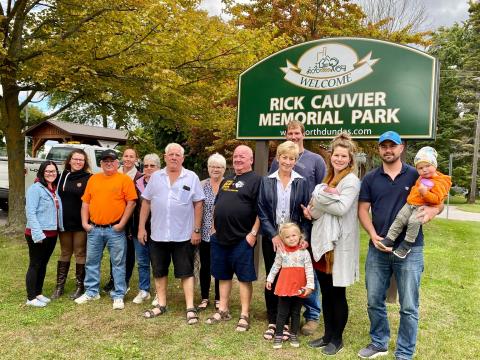 Rick Cauvier was a humble man with a big heart.

The new sign for the Rick Cauvier Memorial Park was unveiled yesterday.

His wife, Sherry Mowat, says Rick would have been very honoured and that it means ‘the world’ to his family.

“He never wanted recognition,” she notes. “Everything he did for the community, he never looked for anything in return…he just did it because he had a big heart.”

“When it was Rick’s Gas Bar over there, he supported our fair every year in a big way,” explains O’Farrell, “and most of it was silent – take this, take that, it’s all good – we never saw a bill for anything. He was very gracious and accommodating to the local clubs.”

“Rick’s commitment to the community goes beyond what many of us know, because it was unspoken” notes Mayor Tony Fraser. “As you can see, we’re beautifying the park and making it more enjoyable for everyone and I think Rick would’ve appreciated that.”

The unveiling of the sign was met with heartfelt applause from Rick’s family and friends.

“I appreciate you all being here and I hope that every time you drive by, you smile, because that’s what he would’ve wanted,” says Sherry.