101st Anniversary of the Dedication of the Morewood Cenotaph 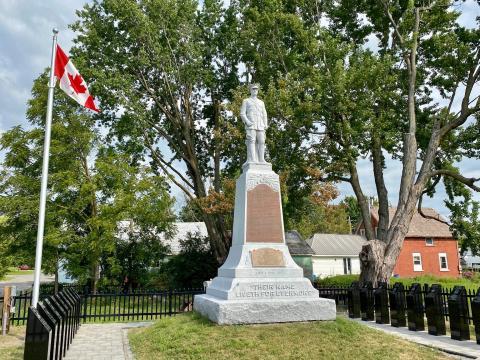 On the 28th June, 1919, a Committee was formed and incorporated “to erect and maintain a Monument and Memorial to soldiers killed in the Great War in Flanders and France”.

The monument was ordered, installed, fifteen names engraved and maintained as promised. On July 6th, 1921, the Monument was officially dedicated. After the Second World War, four names were added. As well, one additional name was recently added from the First World War.

About four years ago, our current committee discussed what we could do to officially celebrate the 100th Anniversary on July 6th, 2021.

We decided to: clean the monument; straighten, clean, securely reattach the large bronze plaque; replace the old flagpole; rebuild the path around the monument – making it accessible; re-do the flower beds; bury underground wiring for statue lighting and an electrical outlet; 20 polished, black granite monuments with sloped tops – 10’x10”x40” high (one for each soldier) were purchased, engraved with pictures of our military personnel and a brief description of each soldier in both official languages, which are securely mounted on underground cement bases. Ten are placed along each side of the large monument. One additional monument was purchased and placed at the back “to remember” all who returned wounded - and would either pass away from their injuries or suffer throughout their lives. As well, one additional bronze plaque was added for a soldier who had been overlooked originally.

The cost of the project was about $70,000. The committee asked for and received: $25,000 from Veterans Affairs; several companies donated goods and services to the amount of about $9,000; the Township of North Dundas donated $6,000 and acted as the banker and issuer of receipts; the local Morewood Recreation Association donated $5,000; local company Guildcrest Homes donated $5,000; there were four fund raising events (from an on-line auction, seed sales, to a take-out dinner) that raised over $7,000; seven local residents each donated $1,000; many residents donated from $10 to $500.  We achieved our goal! The project is complete!

From 6:00 – 6:30pm (during the band’s half hour break) we will have the Rededication Ceremony at the Cenotaph. It will include: local ladies singing O Canada and the Queen’s Anthem; about thirty armed Service Personnel from CFB Leitrim, who will march from the RA Centre to the Cenotaph (about one-third of a kilometer), led by a Piper and a Cadet Colour Party. As well, local Legion Members and others will be in attendance. When the soldiers arrive, the brief rededication Ceremony will take place. Some of the officials present will be our MP Eric Duncan, our MPP Nolan Quinn, our Warden of the United Counties of Stormont, Dundas & Glengarry – Carma Williams, our local Mayor Tony Fraser and his Council, local United Church Minister Pastor Debbie Poirier, along with others. 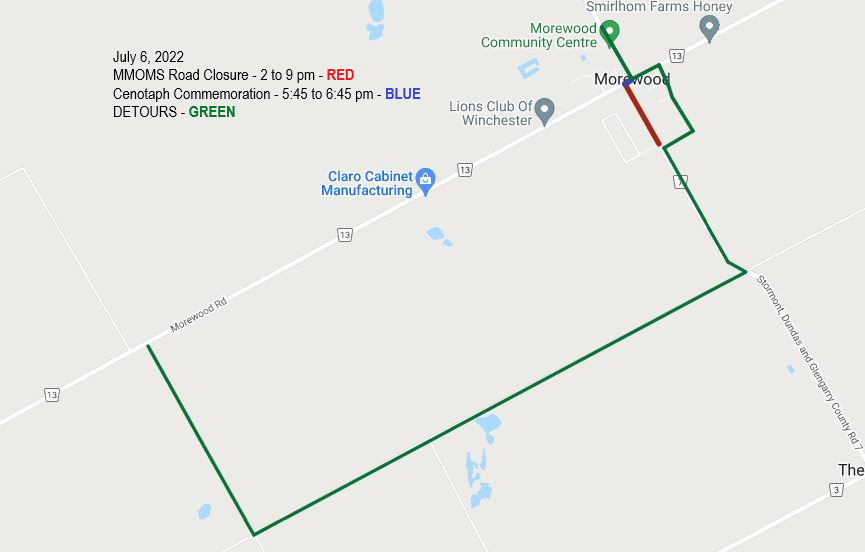